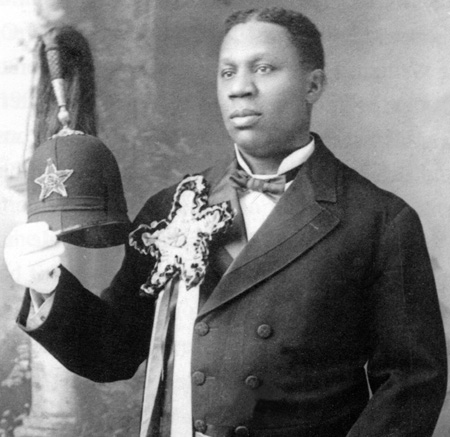 One of the statements that best captures the breadth of the life of Bishop Joseph W. Crowdy was stated by Dr. Benjamin Elijah Mays who said, “It isn’t how long one lives, but how well.” Bishop Joseph Crowdy died at the tender age of 41. During his brief leadership of the Church of God and Saints of Christ, he was able to decode that strange and puzzling book known as the Book of Revelation. His many sermons and the songs he composed unwrapped the mysteries of the revelation of John, who was imprisoned on a lonely obscure island called Patmos.

However, beneath John’s particular use of language and his prevailing apocalyptic symbolism, Bishop Joseph W. Crowdy revealed many challenging and profound truths within the sacred text. It was this sense of peculiarity and profound uniqueness that enabled him to become known to many of the early Saints as the incarnate spirit of John, the Revelator.

Joseph Wesley Crowdy was born on November 8, 1875, in Westwood, Prince George’s County, Maryland. He was the fourth of nine children, born to Caleb and Fannie A. Crowdy. Joseph W. Crowdy was the second cousin of Prophet William S. Crowdy.

During one of Prophet William S. Crowdy’s visits to Maryland, he met his young second cousin, Joseph W. Crowdy, along with a few of his other relatives. This meeting happened prior to the Prophet receiving the Revelation. After meeting his cousin on that occasion, the Prophet returned to his home in Guthrie, Oklahoma, and went about his daily occupation and his Masonic activities. In 1891, at the age of 16, Joseph W. Crowdy moved to Washington, D. C., with his brother, Horace Crowdy II, and two friends, to sing for a living. He aspired to become a great singer and later sang with a quartet in the Washington, D. C. area.

Chief of the Pulpits

After the death of Prophet William S. Crowdy on August 4, 1908, Chief Evangelist Joseph W. Crowdy assumed the leadership of the Church of God and Saints of Christ, fulfilling his 1906 appointment by Prophet Crowdy.

Between 1909 and 1916, Chief Bishop Joseph W. Crowdy as Leader of the Church was expanding through the addition of new Tabernacles. He was ably assisted by Bishop Plummer whose administrative and preaching abilities were tremendous assets to the Chief. The two men worked harmoniously with each other as they furthered the work of Prophet William S. Crowdy.

In December, 1916, the Chief took ill. From his sick bed, the Chief sent for Bishop William H. Plummer, who was pastoring in Boston, Massachusetts. Bishop William H. Plummer answered the Chief’s call saying he would come and get him and take him to Boston. Bishop Plummer arrived in Philadelphia, by train, on December 11th and left the next morning with the Chief for Boston in a taxi cab. Upon returning to Boston on Tuesday, December 12th, Bishop Plummer, welcomed Chief Joseph W. Crowdy into his home. On the Sabbath of December 16,1916, the Chief preached his last sermon entitled, “My Witness is in Heaven, and My Record is on High.” His text was taken from Job 16:25.

At the conclusion of his sermon, Chief Bishop Joseph W. Crowdy stated emphatically, “My time is up!” Chief Bishop Joseph W. Crowdy then approached Bishop William H. Plummer, G.F.A., and said to him: “Prophet William S. Crowdy made you Grand Father Abraham over the Church of God and Saints of Christ, everywhere! And he also put you in charge over all of his business. I will not be with you at the next Passover in the flesh, but I will be with you in the Spirit at all of the Passovers. What little the Prophet has given me…I give it all to you. I do not want to be buried separately. Just as the Prophet set us up…I feel that we three should all go down together the same way.” While these words were being spoken, the entire Congregation present in Boston on that day were on their feet, and crying. Mixed emotions of sadness flooded the hall because the Chief was leaving but great jubilation because they were witnessing the confirmation of Bishop William Henry Plummer as Leader of the Church of God and Saints of Christ by Chief J. W. Crowdy.

On January 1, 1917, Chief Joseph Wesley Crowdy “fell asleep” from Croupous Pneumonia, at the age of 41, at 15 Arnold Street, Boston, Mass., in the home of Bishop William H. Plummer.

The study of Bishop Joseph Crowdy and his prophetic ministry revealed that his approach to the concept of God was nurtured and influenced by the teaching of the Church of God and Saints of Christ. The Church taught him to trust in God and His Prophet and it influenced him greatly and his purpose to fulfill his role as Pastor and later as Leader of the Congregation.

The reality of God, as interpreted and understood by Bishop Joseph Crowdy, pivoted around his belief in God and his belief in God’s prophet, in the spirit of II Chronicles 20:20. The concept of God as experienced in the life and ministry of Bishop Joseph Crowdy did not develop from philosophical and theological debate, but grew and took shape from his religious influence and experience by a dynamic God-consciousness and power.

Thus, the reality of God, grounded in the Black experience in the United States and rooted in the biblical tradition of both the Old and New Testaments, must say that life in its totality is man’s absoluteness in trusting in God and absolute dependency in believing in His Prophets. Bishop Joseph W. Crowdy’s whole life is a testimony to the integration of the reality of God into a constructive activism in believing in His Prophets.

The awareness of God and the belief in God’s Prophets is essential for salvation. The awareness of God, however, is nearer than one’s hands and feet, and closer than one’s breathing. The presence of God permeates the very existence itself and when one becomes aware of such characteristics of God as truth, love and ultimate goodness, then one is opened to the awareness of God. These qualities are both absolute and relative; their absoluteness means they are eternal and complete and their relativity means they realize themselves partially within the society of the Church and continually participate with the on-goingness of man’s quest for salvation.

When a person encounters the presence of God and has a commitment to God’s Prophet, the salvation experience sets justice against injustice, love against hate, and goodness against evil. Thus, the thrust of Bishop Joseph W. Crowdy’s eschatology was rooted in the Book of Revelation as an earthly, or this-worldly, nature, preaching the Revelation and the mysteries of the Kingdom of God. The church’s position states that there is no heaven or hell in the sense that they are places to which one goes after death.

Bishop Joseph Crowdy’s eschatology was geared towards the realization of God’s possibilities through His Prophet for His people within this world’s existence. If man would respond positively to God and obey His Prophet, then the Kingdom of God would be actualized within the individual here on earth.

Bishop Joseph Crowdy, who was considered as having the spirit of John (the Revelator) embraced a realized eschatological vision that transcended the institution of the church, yet it was actively engaged and inextricably bound together in the lives of the Saints, as expressed through many of his matchless sermons accompanied by songs he composed from actual scriptures. Hence, he did not look for a triumphant consummation of the Kingdom of God beyond history, but contending that it is man’s duty and the church’s responsibility to actualize eschatology, the eternal now! This great man, though the youngest of the three prophetic appointees, whose valored work was interrupted, went to sleep with his fathers contending for the faith and having seen the promise from afar off, persuaded and embraced it, “A Glorious Church Without Spot Or Wrinkle.”