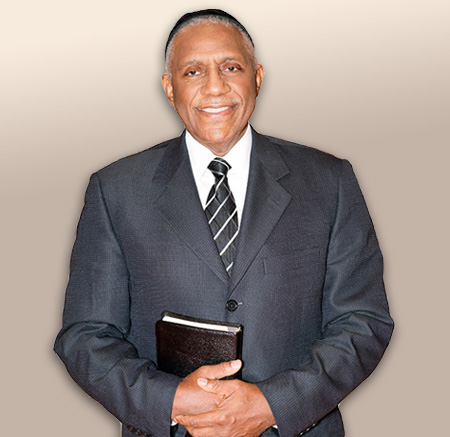 Phillip Eugene McNeil was born in Cincinnati, Ohio on May 13, 1941 to Deacon Ezekiel and St. Mary McNeil. He was raised, along with his sister Joyce, in the “nurture and admonition of the Lord” by his grandparents, Elder James and St. Lucy McNeil. The grandparents had been told by Rabbi Howard Z. Plummer that “one day they will be of service to the Church.” Clearly the words of this prophet did not return unto him void.

Phillip’s formative years were influenced by the love, faith, and charity of his grandparents. His grandfather was a stalwart soldier in the work of the religious Organization, serving as local pastor in a number of tabernacles. His grandmother served faithfully in the office of Mother Sarah and had the distinction of meeting Prophet William S. Crowdy when she was at the tender age of 10 years. Their loving interest in the spiritual growth of young Phillip led to his being very active in the Cincinnati Tabernacle. He sang tenor in the choir, and he held a number of church offices in those early years.

True to the teaching of Rabbi H. Z. Plummer, who stressed the importance of educating our children, Phillip’s family struggled to send him to college after his graduation from Hughes High school in Cincinnati. He was a stellar student gifted in mathematics, and he received his undergraduate degree in that discipline from Ohio University. His next academic steps led to Pennsylvania State University where he obtained the M.S. Degree and the Ph.D. Degree in Mathematics.

He returned home to teach at Xavier University and the University of Cincinnati. Thereafter, he made his way to the Nation’s Capital where he joined a federally sponsored institute dedicated to improving instruction at Historically Black Colleges and Universities. From that position, he became in 1973 a Professor of Mathematics at Norfolk State University, and he subsequently rose to the position of Chairman of the Mathematics Department at Norfolk State. The Department thrived under a number of innovative grant programs that were implemented under his leadership.

His move to Virginia in 1973 set the stage for a long list of dedicated works in the Belleville Tabernacle. He served as the local Sabbath School Superintendent in 1975.  He was selected by Rabbi Levi S. Plummer to chair the Belleville Temple Building Fund in 1976, he served on the Board of General Tabernacle Trustees, and later he was elevated to the position of Assistant General Sabbath School Superintendent.

In 1979, he was ordained to the ministry as an Elder, and he was consecrated a Rabbi along with John H. Eaves, Sr. by Rabbi Levi Solomon Plummer in 1982. During this period he supplemented his education with Divinity Study at the School of Theology, Virginia Union University.  Identified as a true servant leader, Rabbi McNeil was selected by Rabbi Levi S. Plummer to lead the Organization’s redevelopment efforts in 1984. He continues to provide stewardship over the development of the land holdings of the Church of God and Saints of Christ.

A sorrowful day in the history of the Church of God and Saints of Christ occurred on April 10, 2016.  Chief Rabbi Jehu August Crowdy, Jr., G.F.A., the Organization’s beloved seventh Leader, passed away suddenly in his sleep at the age of 46. Heretofore, the existing Chief Rabbi selected his successor as “God went through one, to get to one.”  Since Rabbi Crowdy had not named his successor in the tradition of the previous leaders, the Board of Presbytery for the first time in the 120-year history of this religious Organization was called upon to exercise its Constitutional obligation to elect a new leader. On April 13, 2016, at 11:41 AM, the Board elected Rabbi Phillip E. McNeil as the new Chief Rabbi. Upon hearing the Board’s decision, Chief Rabbi Phillip E. McNeil said, “… I would have you to watch with me for one hour while I go yonder and pray.” The eighth Leader of the Church of God and Saints of Christ walked out of the Board room and into the sanctuary and prayed from 11:41 a.m. until 12:00 noon.  When he returned, he said, “Brethren, I need you to do something for me.  We need to pray.”  They all proceeded to stand for noon day prayer. The record will forever show that the first two things that Chief Rabbi Philip E. McNeil did as Leader of this great religious body was to pray.

Throughout his life, Chief Rabbi McNeil could always be found actively working on behalf of the Church of God and Saints of Christ.  Consequently, after the untimely passing of Rabbi Jehu August Crowdy, Jr., it was not surprising that the Organization’s Senior Rabbi was called upon to assume the mantle of leadership.  The divine Predestinarian factor was undoubtedly at work, for as he said, “I was elected by the Board, but I was selected by God to lead His people.”