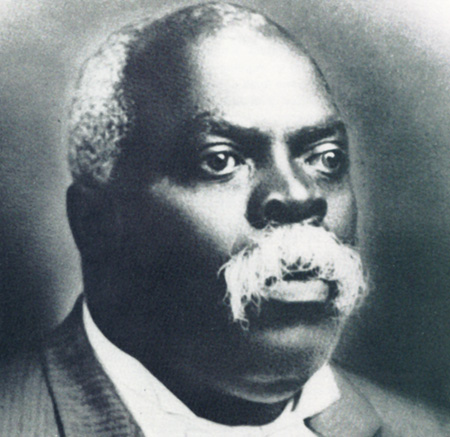 William Saunders Crowdy was born in St. Mary’s County, Maryland on August 11, 1847. At age 16, he joined the United States Army and served in the Civil War from 1863 to 1865. He then became a quartermaster sergeant in the Fifth Cavalry in 1867, and he was discharged in 1872. While in Guthrie, Oklahoma, on Tuesday, September 13, 1892, the Lord GOD appeared unto William S. Crowdy in a vision, telling him that He wanted him to redeem Israel out of spiritual and mental bondage.

Being unaware that he had been chosen by the Most High before his conception and birth as a Prophet to the nations Prophet William S. Crowdy was frightened by this, and subsequent revelations (Jeremiah 1:5). All true prophets of God are called through Divine Revelation. In Numbers 12:6, the Lord God declares, “Hear now my words, If there be a prophet among you, I the Lord, will make myself known unto him in a vision and will speak unto him in a dream.” If one would but read the prophets from Abraham through Malachi, one will find consistently throughout–the calling of the prophets by God through dreams and visions. And so it was with the call of Prophet William S. Crowdy in 1892, “The hand of the Lord was upon him and carried him out in the spirit of the Lord and set him down in the midst of the valley which was full of dry bones.” (See Ezekiel 37:1-14)

“The command was so awakening,” said the Prophet, “that one could not resist its calling.” However, he did resist at first, because of his family, property, and acreage ties. He promised God that if He gave him one good year, he would go and be a messenger to humanity. God gave him a good year, and he asked for another after that, and got it. But in 1895, he again asked God for one more good year, and promised then to prophesy. That year his business endeavors failed miserably and his losses were severe. One day while felling trees, the hand and the Spirit of the Lord were heavy upon him. He said, “It was like the sound of the rushing birds.” He heard a voice telling him to run for his life. He became disturbed, and fled into the woods, thinking that he was going to die. Like the prophets of old, Prophet William S. Crowdy was experiencing an awesome and dreadful encounter with the Divine! As he escaped to the woods, he took an ax and glazed the trees, so that in the event of death his body might be found. The Prophet was at this time going through a great change, and change always begins in conflict.

It was during his sojourn in the wild that the Almighty God revealed to Prophet William S. Crowdy the “Ancient Plan of Salvation” as taught by Moses and the other biblical prophets. Upon returning to his wife and children, they scarcely knew him, for he had greatly changed in both mannerisms and physical appearance. His hair color had turned completely white during his brief absence. Crowdy, realizing that he could not put off his mission any further, began his work in Guthrie. He spent a period of time preaching, converting and baptizing people in the Guthrie area. He expanded his mission to Texas and other southwestern points, preaching and baptizing as he went. In 1896, the Crowdys moved to Lawrence, Kansas, and the Prophet began preaching the word of God, at first on street corners. He organized the first tabernacle at Emporia and the second at Lawrence.

Prophet William S. Crowdy, a great preacher of righteousness, came in the “volume of the book”–the Bible–bringing back to the world the “Ancient of Days.” Those same truths which the former prophets had fostered were heralded again by this Prophet of God: the Sabbath (Saturday), the Passover, the Hebrew Calendar, the Day of Atonement, and above all, the Ten Commandments of the Sinai Revelation.

As he strove to re-establish this doctrine and gather the lost sheep of the House of Israel (Matthew 10:6), he met with much opposition from some of his listeners and from some of the civil authorities. While preaching on the streets, he was arrested 22 times, however, he continued the mission on which he had been sent. The membership was increasing so rapidly in that region that the Prophet gained the attention of the major newspapers. They began referring to him as “the Black Elijah.” He replied, “I am not Elijah, but I am come in the spirit and in the power of Elijah.”

After establishing congregations in three cities in the state of Kansas (Lawrence, Emporia, and Topeka) and ordaining ministers to be in charge, the Prophet moved on to Sedalia, Missouri; Chicago, Illinois; and several cities in New York establishing Tabernacles and ordaining an Elder-in-Charge in each city before moving from one location to another.

In May, 1899, Prophet William S. Crowdy moved to Philadelphia, Pennsylvania. It was in this city that he took up permanent residence for about four years, naming it as the organization’s headquarters. By 1901, more that 1300 members had joined the Philadelphia congregation. Several kinds of businesses were established in that same city, including a general store, barber shop, restaurant, and printing plant. While in Philadelphia, the Prophet convened the first Passovers of our Congregation to be held in the East on April 14-21, 1901 (the first Passover was held in Lawrence, KS in April, 1899). Thousands of saints came from many cities throughout the country to attend the services.

Because of the Prophet’s great success, jealousy began to swell up among many prominent clergymen of many other religious persuasions. He was accused by them of anarchy and preaching false doctrine. In the February 16, 1902 issue of the Philadelphia Daily Press (no longer published), a detailed article appeared telling of the mass meeting held by those ministers and how they declared that “this so-called Negro prophet must be stopped.” In a statement to the newspaper, the Prophet stated, in part,

“The more they denounce me, the more the people pack my services. I came to this city less than a year ago from Texas and have taken in over 1300 converts. They are jealous of my success. I teach my people to love one another, keep the Ten Commandments, pay their honest debts, and abstain from alcohol and tobacco. If that’s anarchy and false doctrine, I am willing to take a back seat. Mayor Ashbridge has seen my work and he finds no offense in me.”

As the Philadelphia congregation continued to grow, the Prophet began to ordain many ministers and send them to various cities throughout the United States to establish this noble work and to gather Israel.

In 1903, the Prophet purchased 40 acres of land, for the religious organization at Belleville, Virginia. In subsequent years, more acreage was purchased by Bishop William H. Plummer. The present International Headquarters and the Temple is now located in Belleville.

In the year 1905, Prophet William S. Crowdy sent an ambassador to South Africa, telling him which tribes would receive the true gospel. As a result, tabernacles now exist in Malawi, Swaziland, Zimbabwe, and South Africa. Shortly after 1905, branches were established in Cuba, and in the West Indies and its tributaries.

In his declining years, the Prophet often spoke to God’s people about love. One of his most enduring and noteworthy pronouncements was “Little children love ye one another,” because it still remains timely and applicable to every generation.

The accomplishments made by this one man in just 12 short years are incredible. Although still within the shadow of the signing of the Emancipation Proclamation, this unsung hero of faith, Prophet William S. Crowdy, excelled not only in the field of religion, but also as a businessman, industrialist, musician, Grand Master of Masons, author, and publisher. For the generations who heard and obeyed his God-centered message, this Prophet of God has been “…as a hiding place from the wind, and a covert from the tempest; as rivers of water in a dry place, as the shadow of a great rock in a weary land” (Isaiah 32:2).

Prophet William S. Crowdy fell asleep on August 4, 1908, in Newark, New Jersey. Although his remains are interred at the Sepulchre of the Prophets in Belleville, Virginia, his great teachings will forever be a lamp unto our feet and a light unto our pathway.