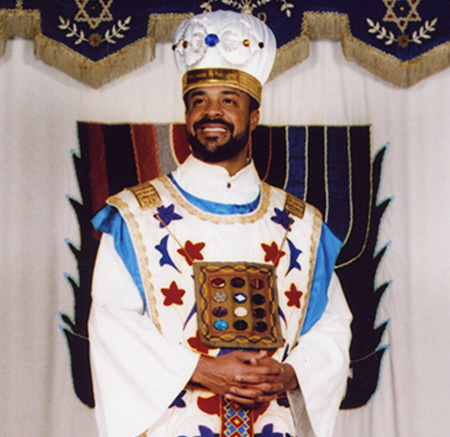 Rabbi Jehu A. Crowdy, Jr. received his early academic training in the Philadelphia Public School System. He received his religious training at the feet of his forebearers in the Church of God and Saints of Christ.  Rabbi Crowdy, Sr. observed his son’s genuine desire to become involved in Sabbath Services.  As a result, he appointed his eight-year-old son an Altar Boy.  Young Jehu also took pride in fulfilling other duties, such as choir member and Shepherd Boy.

While studying at Temple University, Jehu began an intense, critical study of the Bible. Also during this time, his spirituality and faith intensified. Rabbi Levi S. Plummer, Grand Father Abraham, took note of Jehu’s spiritual growth and mental aptitude and during the 1992 Passover, ordained him to the ministry as an Elder. Thereafter, Elder Crowdy served as an Associate Minister of the Philadelphia Tabernacle.  He later completed his academic training at Temple University in 1994 with a Bachelor of Science Degree in Education.  Much of Elder Crowdy’s early ministerial life was spent traveling to the many tabernacles throughout America where he honed and developed his tremendous talents for preaching and teaching.

Repairer of the Breach

In December 1997, Rabbi Levi S. Plummer had taken ill, and he called Elder Crowdy to his side.  At this time, Rabbi Levi completed the “Transfer of Leadership” document, naming Elder Crowdy as his successor.  Four months later, during the Passover of 1998, Rabbi Levi consecrated Elder Crowdy, at the age of 28, to the office of Rabbi.  At the time of his consecration, Rabbi Levi proclaimed, “I have performed a miracle before your eyes.”

Three years later, on November 18, 2001, Rabbi Levi S. Plummer slept with his fathers and Rabbi Jehu A. Crowdy, Jr. assumed the mantle of leadership from his spiritual mentor and friend.

On Sabbath Day, November 24, 2001, at approximately 11:00 a.m., Rabbi Jehu A. Crowdy, Jr. Grand Father Abraham, entered the sanctuary of Temple Beth El and officially greeted the House of Israel for the first time as Chief Rabbi and Executive Leader of the Church of God and Saints of Christ.  Rabbi Crowdy began his remarks by acknowledging the love and gratitude shown to him by the late Rabbi Plummer.  Rabbi Crowdy explained that he could still hear the words of Rabbi Levi saying, “Now my son, I am going to leave you.  I know you will obey me and do as I command you.” Rabbi Crowdy further stated, “All that I am and ever hope to be, I owe it to Rabbi Levi S. Plummer.”

Rabbi Jehu A. Crowdy, Jr., Grand Father Abraham, echoed the words of his great-grandfather, Prophet William S. Crowdy, “Children, love ye one another.” He articulated, “If we want to see God’s Church grow, we must greet each other with a new attitude. We must show more love in the House of Israel, and more respect, and have a greater reverence for God.”

Rabbi Crowdy exemplified this new attitude by exhibiting a humble spirit and a gracious demeanor.  He commenced his leadership of the Church of God and Saints of Christ by honoring the organization’s glorious history while blazing new trails.  He exemplified a dynamic God consciousness, a respect for all humankind, an affirmation to stay within the Framework of the Covenant, and a keen focus on his mission of “bringing back the glory of the Church, increasing the membership, and making Belleville a self-sufficient city.”

His preaching was powerful and contemporary, yet suffused with the spiritual depth of the Prophets of old, for he spoke, “Thus Saith the Lord GOD.”  He would electrify a crowd with his ability to permeate the core of each human being within the sound of his voice, penetrating each soul with transformational spirituality beyond the limits  of religiosity.

Years of Growth and Development

Chief Rabbi and Executive Leader, Rabbi Jehu August Crowdy, Jr., propelled the land development efforts of the Church of God and Saints of Christ with the construction of the first African-American owned hotel in the mid-Atlantic region that rests near the very plot of land purchased by his great-grandfather in 1903 as “a home  for the saints.”   Under his leadership, the holdings now include affordable apartments, single family homes, senior living facilities, a medical care facility, and provide for additional development designed  to uplift and enhance the lives of neighboring communities.

While leading the redevelopment efforts at the organization’s headquarters, Rabbi Crowdy kept a watchful eye on the international membership of the Church of God and Saints of Christ, voicing his plans to worship with the multitude of members on the continent of Africa and across the Islands of the West Indies.  In November 2013, Rabbi Jehu August Crowdy Jr., Grand Father Abraham, became the first leader to travel to Southern and Central Africa, greeting and worshipping with thousands in the Motherland who believed, but had not seen.  In May 2014, he made history again with his visit to Jamaica.  It was the first time since the 1960s that a leader had visited Jamaica.

The memory of Rabbi Jehu August Crowdy, Jr. will be forever etched in the hearts and minds of thousands who were blessed by the sweet spirit of his earthly existence.  He gave the entirety of his adult life to the growth and development of this religious organization. His legacy, as the seventh leader, will remain forever true to the vision of his great-grandfather, Prophet William S. Crowdy, the great Emancipator and Re-establisher of the Church of God and Saints of Christ.