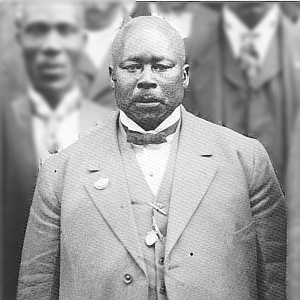 On February 16, 1847 in Eatonton, NC, a child was born to Edward and Fanny Skinner. They named him Calvin.

The great I AM was very present in the life of Calvin Skinner, during the period from his birth in slavery, until near the end of the nineteenth century. God was preparing him for greater endeavors. He was a trusted slave, serving as a houseman and had possession of all of the keys to the storehouse, supply house, the granary, and other buildings. This early responsibility as a “storehouse master” would later lead to greater functions.

Prior to 1900, Calvin Skinner, in an attempt to find better opportunities for himself, moved to Philadelphia. Calvin Skinner tried to provide a good life for himself. According to family sources, other members of the family were also in the city, particularly a brother named Dennis. Calvin Skinner met Emma Henderson in Philadelphia and was married to her in 1885, and they had one daughter named Iona. He was religiously inclined, holding membership in the prominent Bethel AME Church.

It was Dennis Skinner, who first heard the man that was crying in the wilderness, on the streets of Philadelphia, “…the time is fulfilled, and the kingdom of God is at hand: repent ye, and believe the gospel.” The message was so alarming and so disturbing that it arrested the interest and curiosity of Dennis Skinner. Like so many before him had done, he wanted everyone to hear this man who he believed was preaching the truth. He did his best to convince his brother, Calvin, to join him and listen. Calvin was a member of the Methodist persuasion and he did not believe in listening to “street preachers.” But Dennis persisted in asking Calvin to come and hear this “Prophet.”

One evening in the Spring of 1900, Calvin Skinner ventured to walk down to Broad Street. When he reached Broad Street, he could see a man in the distance who was very demonstrative in his actions and he could hear him roaring as he preached. As he got closer to the intersection of Broad and Rodman Streets, he was better able to understand what was being said. He heard these words from a man the people called Prophet William S. Crowdy, “My sheep know my voice and a stranger they will not follow.” Somewhere within the very essence of Skinner’s consciousness, there existed an awareness of the truth which he heard and perhaps this truth to him, felt like fire shut up in his bones. He immediately understood that he knew the voice and that he did not wish to continue to follow in the Methodist tradition.

After the Prophet had completed his sermon, Calvin Skinner went to him and said, “Prophet, I want to join you.” Prophet William S. Crowdy, perceiving that Calvin Skinner was not one to be comfortable on the street, told him to wait, “I don’t have a place to worship.” However, Skinner’s interest in joining was so keen that he and a committee found a place for worship called O’ Neil Hall on Broad and Lombard Streets in the Spring of 1900. Calvin Skinner joined the Church of God and Saints of Christ on June 9, 1900. He was ordained to the ministry later in 1900 by Prophet William S. Crowdy.

In 1906, at the Passover held in Plainfield, New Jersey, Prophet William S. Crowdy announced to the general Church the names of his successors. He had given instructions that the organization would observe the Passover in only one location — Plainfield, New Jersey — and he called for all of the tabernacles to meet there. At this assemblage, the Prophet stood up Evangelist Joseph W. Crowdy, Evangelist William H. Plummer, and Elder Calvin S. Skinner, re-emphasized their previously given titles and offices, and stated emphatically “…All that don’t want to hear these three, go now.”

Following the demise of Prophet William S. Crowdy in 1908, Elder Skinner intensified his assistance and support of the Chief, Bishop Joseph W. Crowdy. Regardless of the fact that he was much older than the Chief, he respected and supported him as his Leader.

After the purchase of the farm land at Belleville, Virginia, Elder Skinner spent brief periods in Philadelphia, as his whole mind was centered on the development of “Canaan Land.” In 1915, during one of his trips between Huntersville, Virginia, and Philadelphia, Pennsylvania, his beloved wife, St. Emma Skinner, passed. He remained a widower for the rest of his life.

At the Assembly of 1909, which was held in Philadelphia, the Board of Presbytery moved to consecrate to the Bishopric the three men who had been set up as successors of Prophet William S. Crowdy. It was administratively crucial at that period that there were Bishops heading our organization. Elder Skinner understood the great burden of responsibility which had been thrust upon Evangelists Joseph W. Crowdy and William H. Plummer, thereby necessitating that they become Bishops. The future of the Church and the work of Prophet William S. Crowdy was foremost in the mind of Elder Skinner. He had a clear understanding of his responsibility, therefore, Elder Skinner, with great humility, declined to accept the opportunity of being consecrated a Bishop. He stated that he desired to retain the office given him by Prophet William S. Crowdy, therefore focusing attention on the younger successors as the public representatives of the Church.

Elder Calvin S. Skinner, Counselor, who was very familiar with the South, was staying for short stints in both Philadelphia and Huntersville, Virginia. Having an extensive measure of knowledge, wisdom, and understanding of the South, he moved again to the South on December 11, 1917. This time however, he was in the South with a new spirit, a new purpose, and a new direction. He was there to help Grand Father Abraham regain Canaan Land, the place that the Lord told the Prophet to “…buy it for the Saints.”

From 1919 until 1931, Elder Skinner was actively involved with the work of Bishop William H. Plummer as Bishop Plummer developed the community of Belleville. If Bishop Plummer moved to the right, then Elder Skinner moved to the right and encouraged everyone else to do the same. These two pioneers in Belleville existed as two, separate, strong, individual men with specific purposes, yet they were united in their commitment and dedication to the work of God brought by Prophet William S. Crowdy.

On December 22, 1931, when the announcement had been made about the passing of Bishop William H. Plummer, Elder Skinner, in the midst of his own personal grief at the passing of his co-worker, recognized that he had an urgent mission to accomplish which required him to take definitive action at once. He immediately sent for a sad and grieving Elder Howard Z. Plummer. The bereaved and mournful Elder Plummer responded to Elder Skinner’s request and the information which Counselor Skinner conveyed had an immediate stunning and sobering effect upon the young Elder.

They discussed numerous topics relative to the future of our religious organization. However, two particular items of the discussion were of paramount importance. First, Elder Skinner apprised Elder Howard Z. Plummer that the mantle of Leadership had been placed upon him and that as God’s anointed, Elder Plummer had acquired new and momentous responsibilities, far beyond those that he may have held heretofore. Elder Skinner assured Elder Plummer that he would support him just as he had done with all of his predecessors. Secondly, Elder Skinner informed Elder Plummer that arrangements concerning the interment of Bishop William H. Plummer could not be completed until the remains of Chief, Bishop Joseph W. Crowdy, were obtained from Boston, MA. Counselor Skinner reminded the new Leader of the agreement made by the Chief and Bishop Plummer that they were to be buried together, and that it was Elder Plummer’s responsibility to insure that the wishes of the two men were fulfilled. Therefore, in making funeral arrangements for Bishop William H. Plummer, care had to be taken not to have his burial until the remains of Chief, Bishop Joseph W. Crowdy were in Belleville.

On Sunday, December 27, 1931, funeral services were held for Bishop William H. Plummer in Belleville, Virginia. The presiding official was Bishop J.W. Brent of Camden, New Jersey, who was the senior Bishop of the Church. The list of church notables who spoke of the life and works of Bishop William H. Plummer was led by Elder Calvin S. Skinner. He spoke glowingly of his former Leader, friend and co-worker. The brilliance of his speech, coupled with his tenderness, touched the hearts of most of the listeners who had gathered to pay their final respects to Bishop William H. Plummer.

A call meeting (by the Board of Presbytery) was scheduled for Monday, December 28, 1931, in the Tabernacle at Belleville, Virginia. It began at 1:40 P.M. with the singing of “I Love Thy Church O God.” Prayer was led by Bishop T. C. Person, followed by the statement of Bishop J. W. Brent, explaining the purpose of the meeting. Bishop Brent called upon Doctor J. L. McGriff, dentist and personal friend of Bishop William H. Plummer. Dr. McGriff spoke of his friendship and continual companionship through the years with the deceased Leader, and of the many confidences that were exchanged between the two friends. Dr. McGriff stated that Bishop William H. Plummer had expressed to him that his son, Howard, was to succeed him in leadership.

Following Dr. McGriff’s statement, Attorney Clayton E. Rabey, who was both Bishop William H. Plummer’s personal attorney and attorney for the School, spoke. He related to those assembled details about the various conversations held with Bishop Plummer regarding the training and education of his son, Elder H. Z. Plummer, in the affairs of the Church and School for the purpose of succeeding him. The statements were received and accepted with a standing vote of thanks.

After having a chair placed in the designated location for the purpose of consecrating a new chief executive, Elder Howard Z. Plummer was asked to come forth and sit in that chair. After Elder Plummer was seated, the members of the Bishops’ Council and the Presbytery Board gathered around him for the purpose of elevating him as Leader of the Church and as Grand Father Abraham. They began to place their hands upon his head.

He then proclaimed Elder Howard Z. Plummer, “Grand Father Abraham of the Church of God and Saints of Christ,” further stating, in reference to Elder Plummer’s anointing and consecration, “…this is the only hand that has been upon his head.” All of this was in fulfillment of Prophet William S. Crowdy’s prophecy of the purpose of Counselor’s long lifespan.

Elder Calvin Samuel Skinner passed away on February 24, 1932 in Belleville, Virginia at the age of eighty-five (85) years and seven (7) days. His funeral was held on Sunday, February 28, 1932, in Belleville. He was eulogized by Bishop H. Z. Plummer.